I’m am finishing my undergrad thesis where we (me and the professor who is orienting me) are trying to use PyMC3 to perform Bayesian inference on a SEIR compartimental epidemic model, which is described as a set of differential equations. We are facing some technical difficulties and since neither of us is very experienced with PyMC3, we would really appreciate some help.

We provided a version of the code in the link below:

What we do on the code above is to simulate the spread of a disease, by running the model using known provided parameters, and later we use the generated number of deaths, we add some noise, and finally we to try to estimate two parameters from this data.

So our problem is now trying to understand how to interpret the results (or how to fix our code) so that we can better understand the quality of the inference. Suppose we did not have the original parameters (like in real life) then how can we know how good are the results? Having the inference showing high confidence in the wrong result and low confidence in the right result is what bother us the most.

Any help would be greatly appreciated.

Hi Milton, I also just finished my undergrad and worked on a Bayesian SIR-like model so I can give you some (hopefully) useful pointers given my experience.

When I do this with the model in your notebook and plot the results, I get the following: 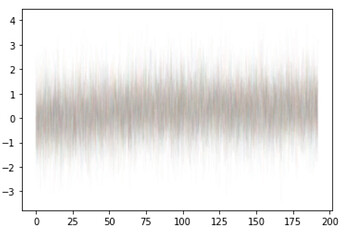 This certainly isn’t right - samples from the posterior predictive in your case should each look like draws of the cumulative death curves (with normal noise). So this means that your model as coded isn’t doing what you think it is. I threw in a pm.Deterministic() to track the mortality dimension of your sir_curves variable directly, and found that the samples looked like this: 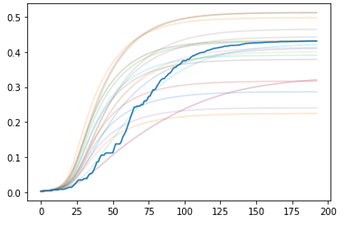 This is your first hint. The posterior predictive looks unruly while your de-noised mortality curves don’t look too bad, so let’s try turning the noise in your likelihood way down and also let it be an inferred parameter. You currently have sigma=1 in your likelihood… this leads to a huge variance compared to the size of your data, which lies between 0 and 1 (since compartments sum to 1). Let’s see what happens to the posterior predictive distribution and the de-noised mortality curves:

So this is much better. However, when I take a look at the posteriors for R0 and a, I see that they’re now much thinner but seem to be centered a bit away from the true values in your notebook. My initial hypothesis is that this is being caused due to the fact that you’re enforcing a normal likelihood on the cumulative mortality curve rather than on the daily increments of this curve - in some sense, a better fitting model lies outside the “span” of your current setup. However, I switched your model to fit on the daily increments and it seemed to perform comparably… so I may be wrong on this. I think you also have an issue going on with the way you treat the interpolation. When you truncate your data, you truncate the mortality data from the front while you truncate the time vector from the back… I think this is what’s causing you to infer R0 and a incorrectly. My suggestion would be to try changing

p.s. Some models I recommend taking a look at are the Prieseman group’s model (written in PyMC!) and the MechBayes model.