fails with a : “ValueError: Bad initial energy: nan. The model might be misspecified.”

Why certain specific parameter values range seem to have problem ?

Hm, I can’t seem to reproduce this, that’s really interesting. 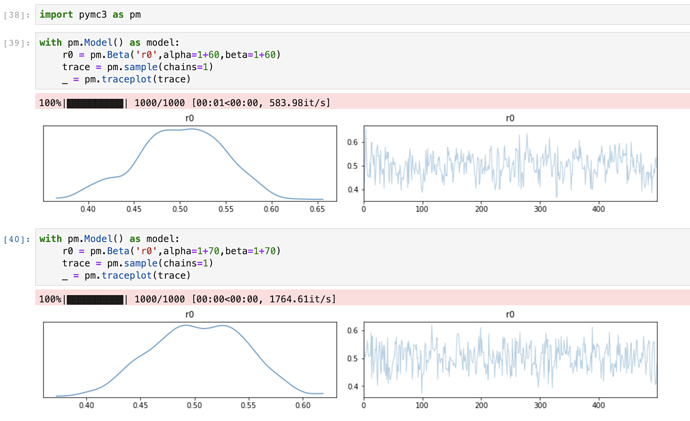 Perhaps “bad initial energy” means that the sampler is trying to start in a region of zero probability density. Since this Beta has such tight tails, could it be that an initialization outside roughly (0.3, 0.7) is causing that problem?

Interesting hypothesis, but then :

Should be even harder to sample !! (but it works perfectly…)

Yeah, I can’t explain that one

Perhaps there’s randomness in the initialization? I may just be making that up, though, I could be completely wrong here.

I’ve restarted my computer, and I still have this weird behavior !

I have no clue !! Except that it seems not to happen on a another computer (thank @tushar_chandra), which is a nice thing, but I still find this worrying for a futur use of pymc3 in production…)

I have not been able to reproduce. Have you tried using different random seeds when calling pm.sample? Or set a different start and init combination?

No seed where specified , so I guess the starting point is different for each run.
(I run both version several time with the same weird behavior…)

I have the final answer for that bug !!

I had the latest numpy installed instead of numpy-1.14.3 (recommanded for pymc3).