How do I "Score" My Model

This might be a simple question but I’m having difficulty coming out with a single prediction from my model. Generally a model will have the target variable and a set of predictor variables, and generates the predicted target. In the case of say a linear regression, the algorithm will essentially be optimizing the regression equation coefficients to minimize the error between the predicted value and target. Whereas, in a Bayesian statistical model the coefficients are not single points but rather distributions and thus the predicted value is also a distribution.

If I want to extract the summary metrics for the distributions converged upon for each prior, I can use

and generate an equation using the mean of the coefficient distributions, analogous to if I ran a multi-variate linear regression and generated coefficients for each predictor variable and plugged those into a simple equation such as: y = ax1 + bx2 + cx3 + d

In this case for a Media Mix model the equation would be more like:

I’ve created my model, fitted the target, and generated the coefficients. Finally I run the posterior predictive check using this code:

and the resulting chart is as follows: 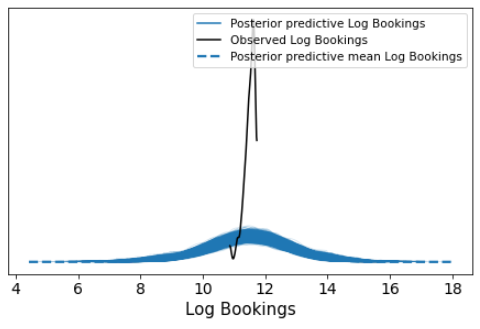 I don’t have an extensive background in the nuances of Bayesian modeling so it’s hard for me to pin point what some of the causes of this could be and whether this is a very significant deviation of the model prediction from the actual values.

Are there any best practices to check variables before running the model?

After running my model, what are some checks that I should perform to measure the validity and accuracy of my model?

If anyone has any experience with Media Mix Modeling and Pymc3, please reach out to me!!!

Also, please correct me if my understanding is at all incorrect or missing any key pieces of information above!

Others here are far more qualified than I, but two things:

Your ppc plot shows clear signs of overdispersion (link to a blogpost of my own). It could be due to the choice of priors, for example the prior on the scale parameter having too much of its weight on too large values or due to model miss specification.

After running my model, what are some checks that I should perform to measure the validity and accuracy of my model?

You should not look at the number of samples but at the number of effective samples (ess). In most cases, an effective sample size of ~400 is enough, depending on the accuracy you want on you estimates (or if you want accurate estimates of tail properties) you may need more. The MCSE will give you an idea about where you are at. Both these quantities can be used to assess convergence of the MCMC. Take a look at this PyMCon talk to get both an overview on model convergence and more details on the strange words and acronyms I have just written:

A Tour of Model Checking techniques by Rob Zinkov PyMCon2020

Talk Abstract Have you ever written a model in PyMC3 and aren’t sure if it’s any good? In this talk I will show you the many ways you can evaluate how will your model fits your data using PyMC3. Not all these techniques may be applicable for your particular problem but you will definitely walk away with a few new tricks for being confident in the models you fit Rob Zinkov Twitter @zaxtax GitHub zaxtax Personal website Talk [A Tour of Model Checking techniques by Rob Zinko…

and what does the tune parameter do?

The tune parameter regulates the number of warmup/tuning iterations during which the sampler parameters are tuned in order to be able to sample from the posterior efficiently and accurately. This blog post covers that in more detail with diagrams and intuitive explanations in case you want to learn more about tuning.

Am I extracting the coefficients correctly using az.summary(trace)?

Here I am a bit lost about both what you are doing and about what you want to do. If you are using sample_posterior_predictive, is should internally take care of any equation you have like the y = logistic... because you have had to use it when creating and sampling the model. It is hard to see what is happening only with parts of the code.

I believe the reason behind part of the confusion could be behind these sentences, but this is a guess:

If I want to extract the summary metrics for the distributions converged upon for each prior,