If I wanted to have a von Mises distribution that is bounded with a lower bound of 350 degrees and an upper bound of 30 degrees (so encompassing 40 degrees on a 0-359 continuous scale), how would I implement that? It looks like the documentation says that von Mises go from a scale of -np.pi to np.pi, so what happens if I enter a value outside of that? Does it automatically get converted into the -np.pi to np.pi scale?

For example would the following code work correctly?

Would http://docs.pymc.io/api/bounds.html work for what you are trying to do?

It seems the von Mises is already bounded to support -np.pi to np.pi according to the documentation. But it’s unclear, even with that documentation, how I can further bound the von Mises such that I want the upper to be -2.96 (equivalent to -170 deg.) and the lower to be 2.62 (equivalent to 150 deg.) but I don’t want pymc3 to interpret the boundaries as the reverse such that 0 would be allowed but -3 would not be allowed. I also want to know whether I need to transform/bound any distribution that is the prior for the mu in the von Mises distribution (such that the prior only inputs values between -np.pi to np.pi) or whether it will automatically get converted within the values that von Mises supports.

The distribution is periodic in 2pi. So any ‘mu’ you specify (directly or through a prior) will get folded into the -pi to pi interval modulo 2pi. You can check this by sampling with mu = mu0, mu0+2pi, mu0+4pi etc.

Oh I see. Thanks for the help about how ‘mu’ gets folded into the interval. That solves several problems but leaves me with one last concern. If I want to use a mixture of von Mises distributions, I have to specify VonMises.dist, but the use of .dist means that I can’t use pm.Deterministic to fix the folding issue. For instance,

Is there a way for me to use a Deterministic function or to otherwise transform the dists so that both von Mises components are within the interval -pi to pi?

For anyone wondering how to fix the von Mises between -pi and pi (given that you are not using a mixture), the easiest way I could think of was to create a custom function:

The problem is I can’t use pm.Deterministic.dist so I can’t transfer this to using a mixture of von Mises.

Ok, so I think I have it working now. But it required monkey patching which I realize is bad coding practice. I’d love any ideas on how to get this implemented without monkey patching.

Here’s how PyMC3 currently deals with a mixture of von Mises distributions (using pm.Bound does not fix it and instead removes the values outside the boundaries): 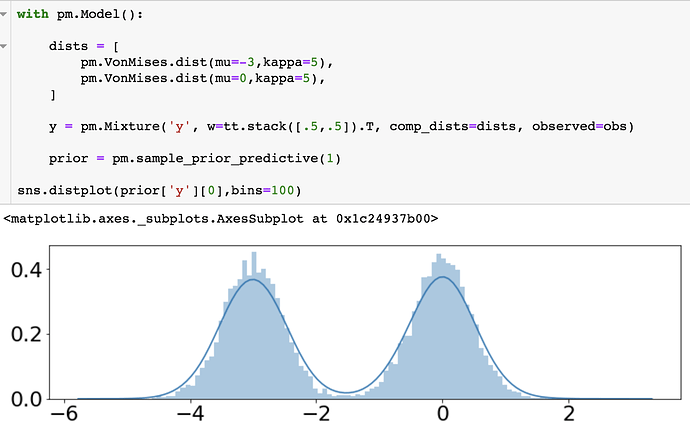 And here’s what I wanted it to do and what it currently does after monkey patching: 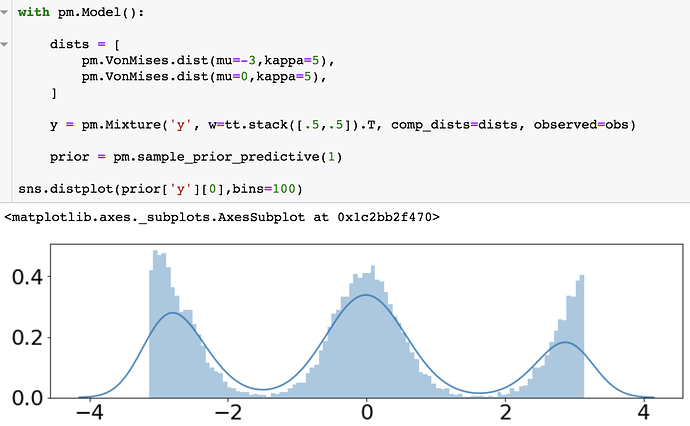