Random Variable with observed data not in trace

I’m new to pymc3 and I am trying to generate samples from a Categorical distribution for a list of discrete variables rv_list related to patient data. I’m trying to wrap my head around why adding observed data to a Random Variable causes it to not appear in the trace generated by pm.sample().

Below is an example where I do not include the observed data in the Categorical distribution. 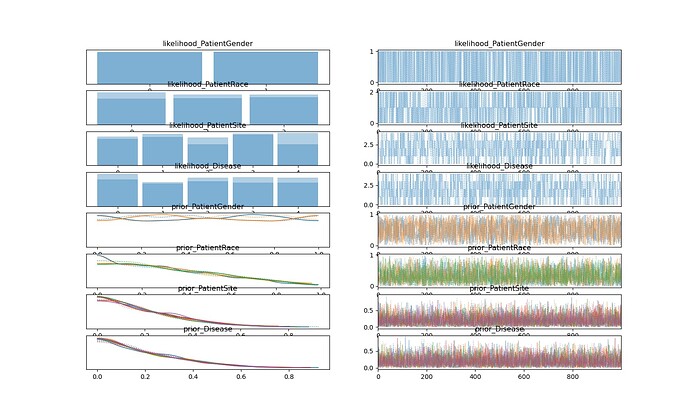 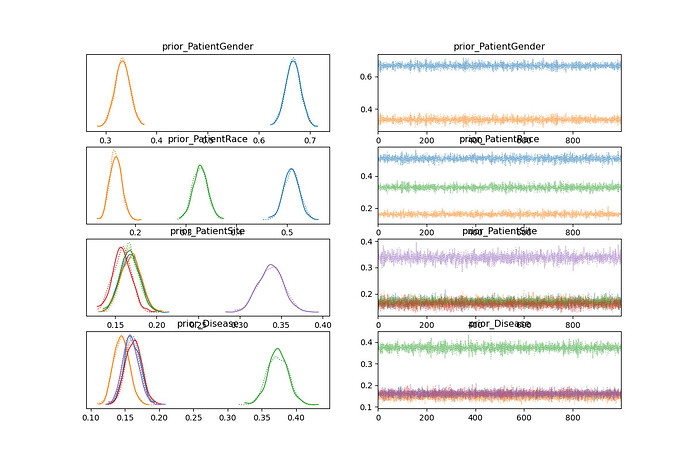 Firstly, I am not sure why adding observed data to the declaration of the Categorical variable causes that variable to disappear from the trace output. Second, I am confused as to why the observed data would cause the prior random variable to change. (As one example, in my data, there are many more females than males, as seen by the blue distribution taking on a larger mean value than the orange distribution in the top left chart of the above figure).

This is probably a pretty easy question for someone with experience to answer, but I was somewhat unclear about the expected behavior based on the documentation. For example, in the Getting Started guide, there are 2 case studies including observed data; in the coal mining case, the variable with the observed data appears in the final trace, and in the stochastic votality case, it does not.

Thanks in advance for any help!

Thanks for the response! What I was trying to do was accomplished by pm.sample_posterior_predictive(trace)

Glad you got it sorted out!