However the two posteriors, after updating 10 times and sampling with 100 observed look quite different as shown below. What am I missing here? 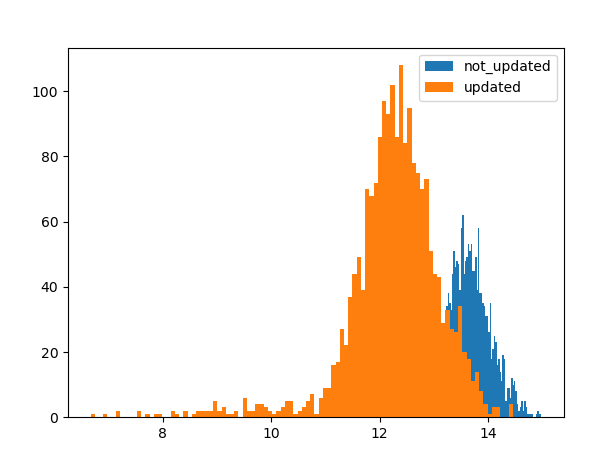 I have only skimmed through the updating priors notebook and have never followed the example and executed the code myself, so my understanding of what the notebook is actually doing may not be completely accurate.

My guess is that the prior updates are done in a univariate mode. Therefore, much of the information contained in each posterior update is lost; the posterior distributions for alpha and betas are not independent, and are probably significantly correlated (you can check this with az.plot_pair on the initial model for example). However, when setting the prior for the next iteration, the priors are set independently on alpha and each beta from its marginal posterior distribution, which is not the same as using the whole posterior as the prior for the new fit.

This is almost certainly a problem with applying the “width extension with linear decay” multiple times (i.e., this part:

You can basically see it as the bad left tail of the “updated” distribution. This has been noticed before:

Can traces be used as priors?

I started running into some issues. With the project that I’m working on, a bunch of the variables are unobserved. Since the from_posterior function adds 3 times the width of the old posterior to the left and the right of the old posterior, the new priors of these unobserved variables become much wider than the original prior. So I’m adding some small constant instead. This prevents the blowup of the prior, while still giving the possibility of exploring values it hasn’t sampled in the past.

context: Can traces be used as priors? - #6 by Edderic