Why does sample_posterior_predictive use only one chain?

Should these warnings be ignored?

Hi David,
I don’t think that’s a problem: that’s probably because sample_posterior_predictive spits out a Multitrace object, which stacks draws and chains, whereas summary, which is actually the ArviZ function, expects an InferenceData object with seperate dimensions for chains and draws.
I’m guessing that if you inject your posterior predictive samples in the idata object where you already have the trace, the warnings should go away – speaking under the control of @OriolAbril here

To have sample_posterior_predictive return a dict whose arrays keep the chain, draw shape, you need to use the keep_size argument, otherwise the chains and draws get flattened as you have already seen. It’s not because only one chain is used however, they are all used but the samples are stored as nchain*ndraw, ... arrays

When I use keep_size=True on pm.fast_sample_size_predictive(), I still
get a posterior dataset with only a single chain rather than two. And now the dataset has 2 draws (instead of 600 it should have, or 1200 it has with keep_size=False), and an extra (unwanted) dimension (of 600) on all my result variables.

When I try pm.summary() on the posterior predictive, it gives me thousands of error messages, instead of the 19 message before:

Have I discovered a bug in the keep_size logic of pm.fast_sample_size_predictive()? Or perhaps I am making a different mistake now?

Mmmh, as if there were some mismatch in the dimension attributions in fast_sample_posterior_predictive

Pinging @rpgoldman here, as he might have some insights

Is there a return_inferencedata argument to sample_posterior_predictive? We have had some issues retrieving the original shape due to this internal reshaping when sampling the posterior predictive. Here it looks like it is ignoring the info in the provided trace (or posterior dataset) and independently of the arguments it adds a dummy dimension at the beggining to play the role of chain dimension.

Not yet: it seems that there is a PR open to do just that (by @rpgoldman BTW).

Here it looks like it is ignoring the info in the provided trace (or posterior dataset) and independently of the arguments it adds a dummy dimension at the beggining to play the role of chain dimension.

Exactly, I have the same impression

from_dict(). I tried reading the documentation to understand the difference between it and from_pymc3(), but the site 404ed.

You can manually add a dict of ndarrays (assumes dim order as chain,draw,*shape) for each group you want to populate.

You might want to try a few times how it works in Jupyter Notebook (html_repr makes it easy to inspect). <-- this is especially true when trying dims and coords.

See this link (I think we just upgraded the site?)

I’m not sure what is going wrong here without an example to run.

What happens in fast_sample_posterior_predictive is that we create a single chain which is a dict of variable names to arrays of shape n, ... where n = cs for c the number of chains and s the length of each chain in the posterior multi-trace (and heaven help you if the chains aren’t all of equal length).

If it is desired to keep size, then for each ary in the dictionary we do

… which looks like it should do the right thing, assuming that nchains and ndraws are being computed correctly. Again, given an example, I could check this. It would be interesting to know whether there is any difference when you pass an InferenceData or a MultiTrace as the posterior trace to this function.

@OriolAbril – Should pm.summary() – which is really just az.summary() even work on a posterior predictive distribution? In PyMC3 these are very different things from posterior distributions.

I don’t think we can make more progress without a runnable example. @bridgeland would you see if you can provide one?

Returning inference_data from posterior predictive sampling could be fraught with issues, because PyMC3 uses the same functions (spp and fspp) to predict both in and out of sample.

Or, more accurately, PyMC3 uses these functions to predict in sample, and if you torture the input trace, you can use them to predict out of sample, as well.

I can create an example to show the problem, but not until Wednesday, as I am out of town for a few days, visiting my elderly father in Michigan. 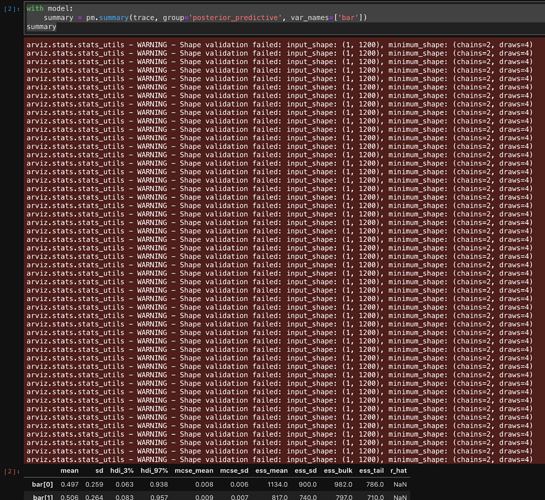 bar in the posterior predictive has a bogus shape: 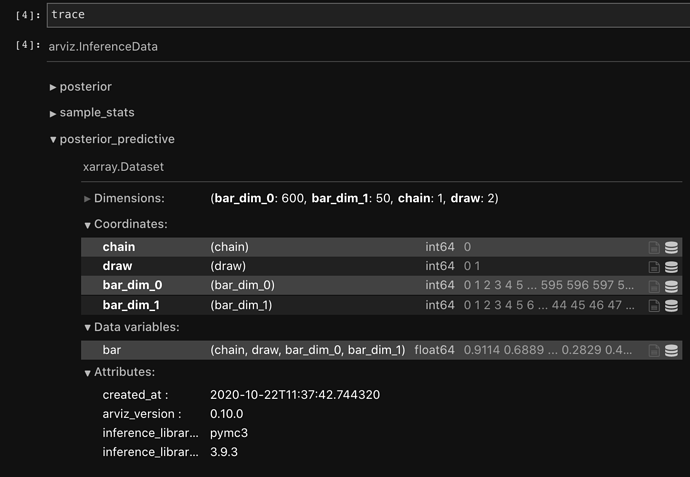 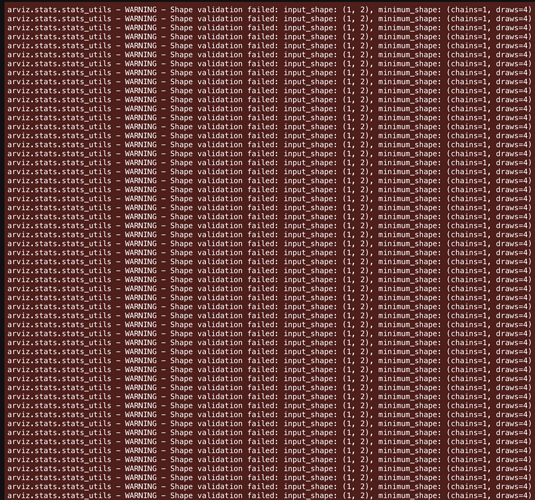 I can replicate this error. I will see if I can track it down.

Meanwhile I am suppressing the thousands of warnings via: