How to recreate PPC from linear model coefficients?

EDIT: I worked it out by trying to emulate the shape of sample_ppc. I iterated over each sample in X_i and chose the appropriate corresponding beta weight. A moderator can feel free to delete this post.

I have a hierarchical Bayesian model (thanks @junpenglao!) that models gene expression of a single sample against a background cohort and the results that I get out of sample_ppc are great.

However, I’d like to use the coefficients in the linear model to recapitulate the distribution I get out of sample_ppc so I can get a posterior for genes that I did not train with (due to runtime limitations), but my attempts produce a different distribution and I’m not sure why.

From sample_ppc (posterior is Laplacian, ppp is posterior predictive p-value relative to the vertical line): 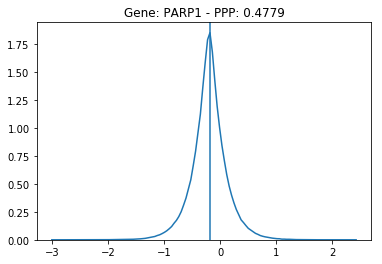 If I use the trace coefficients and sampling or averages from X_i, I get something like the below for the same gene: 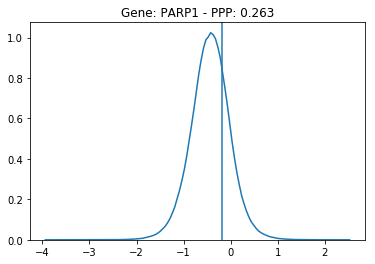 No matter how I use the trace coefficients, I can’t seem to recreate the result I get from sample_ppc.

My X_i are different sizes which is why I randomly sample or take the average over X_i.

Thank you for any help or feedback, example code is below where t is the trace and classes are the different X_i groups.

I have encountered a similar problem trying to reproduce the mean of the ppc using the coefficients from a simple linear model. I’m using the means of the traces for each beta applied to the data to try to produce the predicted value, as you would in a standard OLS regression framework. The resulting predicted values are highly correlated with the mean of the ppc but the values are off by a constant. I’m trying to understand why this is the case. It sounds like a similar situation to what @jvivian describes; I’d be interested to get more details on his solution.