I have a question related to modeling sampling error.

I would then like to feed this information into a Gamma distribution, but it’s not clear how to do this since the values from that Normal distribution are no longer observed.

So my question is how can I include the uncertainty related to the sample size?

The model that I am using with the observed values is here:

I have a hierarchical model in which the observation values range from 0 to 100 and the likelihood distribution is Gamma distributed. To handle the occurrences of 0, I am using a Zero-inflated mixture model where the probability of a zero occurring is Bernoulli and when the data is non-zero, it is Gamma Distributed. The class of the distribution is presented below. I am having trouble sampling from the posterior for the hierarchical model mentioned above. There are three levels involved, includ…

I was just going to suggest you open a new post

When you say observed values are coming from a sample, do you mean something like in a Binominal observation where you observed data as pairs (n, k)?

To clarify, I am looking at subpopulations in a sample, but it’s not as clear as a Binomial observation.

Sorry, by normalized I mean taking the observed weighted data and dividing by the size of the population. The contribution of each member of a sample towards the observed data is unknown and different for each member.

As an example, for an event I am told that of a population of 1 million people, a sample of 34 people attending the event was taken and that after weighting there were an average of 40,500 people of that population in attendance per minute of the event. The value I am told was observed for the event is then 40,500 / 1,000,000 = 0.0405. Thus, without knowing the weight each person in the sample contributed to the value, I want to place uncertainty around the value of 0.0405 proportional to the amount of people that were used to form the sample.

@junpenglao, does my clarification make sense?

I see, in this case I would try to model directly on the observed (i.e., 34), and since this number is the output of the linear function (observed = total population * unknown proportion $p$ * time of the sampling period), you have:
total population = 1 million, this is an estimation so you can also represent it as a prior distribution
unknown proportion, 0.0405 in your example but unknown, you can model it as a Beta distribution
time of the sampling period = a known value. For example in a 10 hours event you sample for 5 mins then this value is 5/(10*60) = 0.00833333333

and you can model your observed as a Poisson: observed ~ Poisson(total population * unknown proportion $p$ * time of the sampling period).

It sounds like you are saying to model each event as a Poisson process with rate proportional to the population proportion of the event times the length of the event.

I don’t think this is quite what I want but let me see if I can summarize your above thoughts.

Yep that’s exactly what I meant. I dont think the rate of the Poission would be much higher than n, as it would just drive down the unknown in p * r * t (i.e., r, and p if you place prior on it)

Thank you for all of the help.

I am attaching a toy example to illustrate what I believe to be are problems with this approach. Note that t, n, and p are assumed to be known, i.e. we know the time in seconds of sampling, the number of people sampled, and the true number of people in the population. What we do not know is the number of viewing seconds (viewing_seconds) derived from the sample and the true average proportion of the population for each event ®.

From the correlation plot, we see some strong correlation between n and viewing_seconds since t and p are essentially constant.

So I can use either the recorded viewing seconds or n and set up a Poisson likelihood distribution with rate r * p * t and place a Gamma prior on r (I have some prior knowledge on the behavior of these r’s).

The problem comes from interpreting the trace for the r value after sampling with Metropolis. If I use the measured viewing seconds, I get the correct interpretation of r, the population proportion in attendance on average, but there is no uncertainty around these values. If I instead use n as the observed, I get the uncertainty around r, but in the ppc, I lose the ability to understand the inferred viewing seconds of the event since n is not directly proportional to the viewing seconds. Worse, I lose the interpretation of the r value.

I would prefer if it is somehow possible to use the measured viewing seconds in the likelihood but place uncertainty around it proportional to the number of people used in the sample.

Does that make sense?

I think I still not get what you are trying to model, maybe it would help to writing down the generative process, generate some fake data, and see if you can build model to recover the true parameters. It might help also to consult some papers in ecology on related topic.

I’m trying to find the true latent value of r which is the average proportion of a population that was attending/viewing at any given second of an event. The measurement of r is derived from the (sum of the viewing seconds / duration of event) / population size or r = (sum_viewing_seconds / t) / p. I don’t know how they come up with sum_viewing_seconds as it’s dependent on each sampled person’s weight and actual attendance/viewing. Note that the weight of the person is the number of people that person is meant to represent. The only thing I know is the number of people that are used in the sample.

Since there are events measured that use much less people in the sample, I’m skeptical of the measured sum_viewing_seconds and therefore the measured r. Further, I know generally how r should behave based off of the interests of the population and the event in question. I was hoping there would be some standard way of incorporating the sample size into the uncertainty but it doesn’t sound like that is the case.

Hopefully this additional information is helpful.

I’ll try and see if there are any papers in ecology that measure population proportions of events using samples that I can borrow from. Thanks!

Additionally, how come if I change the magnitude of p, i.e. express it in millions and carry that through the other calculations, the trace plot doesn’t show point estimates for r anymore and each r has a distribution?

That’s just a visualization problem I think, as in the original magnitude the random walk is too small compared to the range of the data. if you just plot r[i] they should have the same shape

Here are the resulting traces for one event: 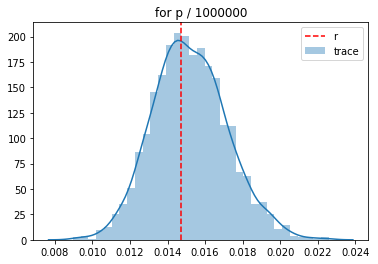 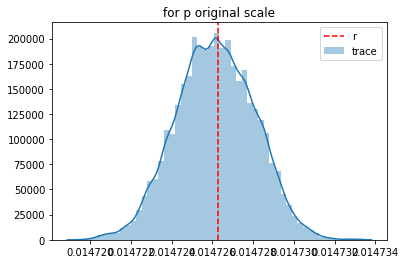 You are right that the shape is the same, but there is much much less uncertainty in the latter when the value for p is in the original scale.

Does that match expectations?

I would say it is reasonable, as scaling the input change the measure in the parameter space: remember the volume stays the same under different parameterization, which means the uncertainty might scale differently.

But in your case above, the y-axis of the histograms are different - the number of samples is not the same, so it might change if you sample more from the first case.

The sampling from the second one comes from using Metropolis since NUTS fails with the large parameter space, I can try thinning the trace.

I would say it is reasonable, as scaling the input change the measure in the parameter space: remember the volume stays the same under different parameterization, which means the uncertainty might scale differently.