However, I now require to also model the observed covariances between these kernel distributions at any point (as if they belong to a multivariate normal with a dependent covariance structure). Given that there are a total of 2000 kernels, I would imagine that modeling a 2000x2000 covariance matrix would be very costly. On the other hand, from manual observations, I am able to tell that these kernels are mostly independent and the covariance structure would hence be very sparse.

I was wondering if there is any way to use the multivariate normal distribution from PyMC to appropriately estimate a sparse covariance structure.

Also to give you more detail, I am using ADVI to enable faster fits of these 2000 kernels, so any suggestions should also most likely be compatible with ADVI.

I wasn’t able to find any documentation on modeling sparse covariances for multivariate normals and any suggestions/assistance would be much appreciated.

Here’s a Colab notebook with a comparison between LKJ and low rank covariance priors.

Thanks for your helpful suggestions. Here is some extra information regarding your comments:

Do you have any known grouping structure to this data? For example, if you get 2000 dimensions from 10 variables X 40 timesteps X 5 spatial locations, you could use a Kronecker structured Normal model to represent the 2000-dimensional covariance in terms of the Kronecker product of 10x10, 40x40 and 5x5 matrices.

Not really, these 2000 kernels are in fact a dimensionality-reduced subspace of a higher dimensional feature set (90K feature dimensions that are not independent).

Is a low rank assumption for the covariance okay? Or do you want to get actual zeros (or close to zero) values for the posterior off-diagonal elements?

Interesting question, I don’t think I want to enforce zeros, I just thought that would simplify the complexity.

Is there a way to test if a low-rank covariance structure exists in the data?

I have extracted some plots to visualize the sparsity of the covariance.

Here is the 2000x2000 correlation matrix across kernels (absolute values of Pearson’s correlation are plotted): 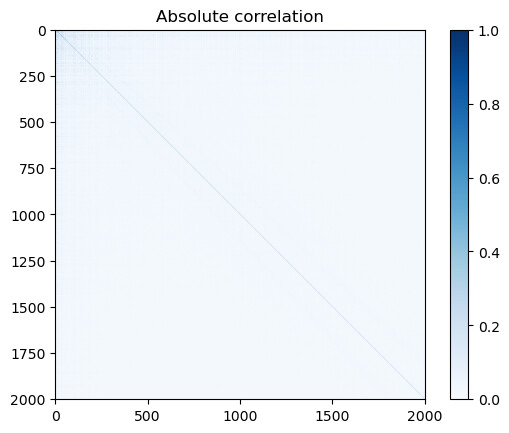 and this is the histogram of the upper triangle (notice the y-axis is logarithmic): 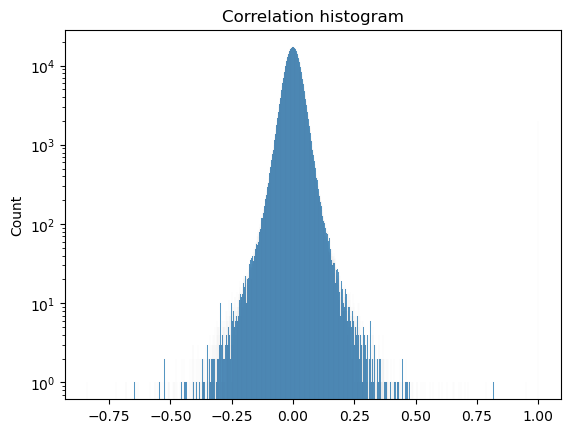 To me, these indicate that the majority of the correlations are close to zero and that’s why I expected a sparse model would help.

Is there a way to test if the low-rank assumption holds?

P.S. Given that there is a strong diagonal, is that suggesting the low-rank assumption does not hold?