Multilevel model with covariance of 3 variables

Hi all, I’m trying to build a multilevel model that should estimate the electricity consumption of a building based on:

Thanks in advance for your help

you will get a LKJ prior on a covariance matrix for three random variables rather than 2. You can then use that Cholesky factor to put a prior on your coefficients, e.g.:

this should give you n_buildings vectors, each of length 3, and estimating the covariance between these. Of course the mean doesn’t have to be zero, you could do something else.

Let me know if that makes sense or this is not what you were looking for!

Hi Martin, first of all thanks a lot for your reply. I tried to implement your solution but without much success. I will try to describe my model a bit better so that you can have a clearer idea of what I’m trying to achieve and maybe provide some guidance.

The model I’m trying to build is one that should be able to predict the daily energy consumption timeseries of an individual building, using as predictors the two variables I mentioned in the main post, and pooling on a variable that is representative of the shape of the electricity load of the building on a certain day, and that I call here ‘cluster’ since it is detected with a clustering algorithm.

I am quite unexperienced with multilevel modeling, so I started building my models by following the radon notebook, gradually increasing the complexity. If we wanted to create a parallel with the radon, we could say that:

The last model I managed to compute and make work, is one where both the intercept and the temperature coefficients are varying according to the cluster variable:

Now what I would like to know is if there is a way (and if would make sense) to create a new model where the intercept and the 2 slopes covary, in a similar way to the covariation model described in the radon notebook, but now with one intercept and 2 slopes, instead of just one intercept and one predictor variable.

Hope I managed to describe my problem clearly enough (not really easy to sum up in a forum post, as it is the subject of a scientific article, but I tried my best).

Thanks again for your help!

sorry for the delayed response! Here’s what I would try, if I understand you correctly:

Since I don’t have your data, I haven’t tested this, but I hope this makes sense and I’m not misinterpreting what you’re looking for.

Thanks a lot for your help, Martin. The model you posted computes and provides pretty satisfactory results too.

I have two more questions, related to this model, that maybe you might help me with.

First, I was trying to write this model in mathematical form. Following this section of the radon notebook:

I came up with the following: 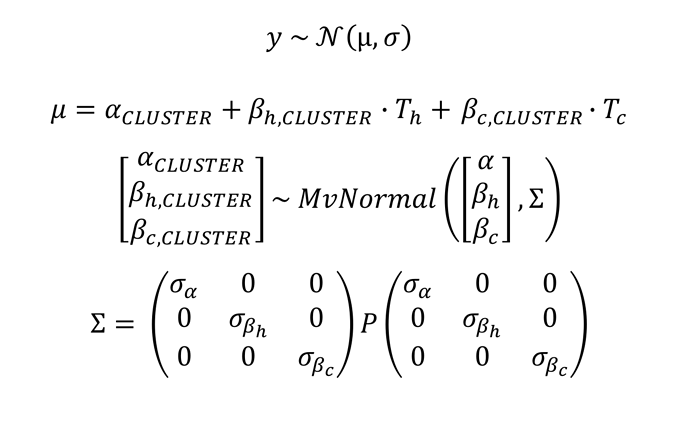 Do you think this mathematical representation is correct for the model you sent? What would the matrix P look like?

Also I’m trying to a obtain graphviz representation of this model, but for some reason when I try to use graphviz with covarying models, through the command

I get the following error:

It’s a pretty vague error and I can’t seem to debug it. Graphviz works fine with every other model, but as soon as I introduce covarying terms this happens. Might be a long shot but maybe someone here encountered a similar issue at some point.

Thanks a lot for your help again!

Your mathematical form looks good to me!

I’m afraid I haven’t used the graphviz functionality in pymc3, so I don’t know what’s causing that error – hopefully someone else knows!

Many thanks to both! Great to find support here.