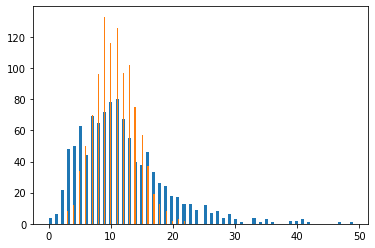 To implement this problem in PyMC3 I proceeded in the following way:

However when proceeding in this way it looks like the ‘mlog’ and ‘sd’ variables are ignored and I am just sampling the value of ‘lognorm’ as if it were the single expectation value of the Poisson process. How should I proceed?

Your plot regarding a log-normal / Poisson process makes sense in that we see extra variance as compared to a Poisson with fixed mean parameter. I am a little unsure as to the meaning of this statement:

I am just sampling the value of ‘lognorm’ as if it were the single expectation value of the Poisson process.

Thanks for your answer. Indeed, there is extra variance in the data, as you point out, which means that it should be possible to fit for the mean and standard deviations of the log-normal distribution, the ‘mlog’ and ‘sd’ variables above.

What I mean is that the value of ‘lognorm’ fits to the mean value of the Poisson process, and nothing happens to the variables that I am really interested in, i.e. ‘mlog’ and ‘sd’. Their posterior is exactly the same as their prior, so it is as if they are completely ignored.

How would you code the problem that I am referring to?

I think you need to use the shape parameter in Lognormal. Currently you are fitting just a single Poisson process to your observed data realiz. I think you want to draw the poisson lambda from a LogNormal distribution and then for each draw a single Poisson realisation.

This seems to work! Thanks a lot @nkaimcaudle