Today I was skimming a paper by Kruschke “Bayesian data analysis. Wiley Interdisciplinary Reviews: Cognitive Science 1.5 (2010): 658-676.” and I came across this paragraph in the section Can the Effect be Replicated? A Natural Bayesian Answer:

Being Figure 4 the plot of the marginals, I feel like the reader could interpret this paragraph as a suggestion to sample combinations of parameters values from the marginals. But I just skimmed the article, so I will read it more thoroughly later. In the mean time I got to think and I would like to ask you:

So i would say no to both of your question above, unless the posterior samples are mostly independent as you noted. At the very least, you need the joint posterior from the lowest hierarchical.

Thank you for your input! But I am not sure I fully understand the followinf part of your answer:

but the hyperparameters of β,σ\beta, \sigma is not needed, which means you can take the marginal of them

Would you be so kind to elaborate?

For example, if you have

you just need the joint posterior of beta and sd to get your posterior predictive distribution, as it effectively marginalised over mu0 and sd0

I understand. Thank you.
And the mode of the marginals is not necessarily the MAP of the joint posterior, right? From what I see, the find_MAP function in PyMC3 gives values that are close enough to the mode of each marginal, but not the same (sometimes quite different actually).
I have seen several examples (e.g., the hierarchical modelling example in the PyMC3 documentation) in which the means of the marginals are taken as reference values for the parameters in the regression model: 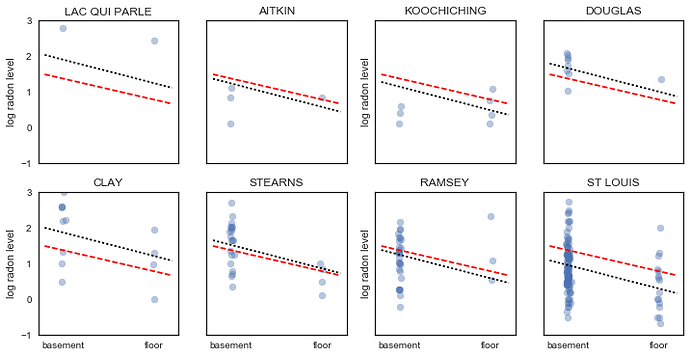 I am then wondering whether the line created by taking the mean of each parameter is a reasonable summary of the model.

And the mode of the marginals is not necessarily the MAP of the joint posterior, right?

That’s right, for example you can see this in Copula (same marginals, different global maximum https://github.com/tensorflow/probability/blob/master/tensorflow_probability/examples/jupyter_notebooks/Gaussian_Copula.ipynb)

It is reasonable if you only care about the expectation - afterall what it plots is the expected slope and intercept. Of course if the posterior is highly correlated the result could be biased.

And what a coincidence that a new post by twiecki is about copulas. But I do not like the cliffhanger at the end, I wanted to see the PyMC3 example