Building an abudance and detection probability model in PyMC3

I’m trying to build an abundance and detection probability model in PyMC3 and have gotten stuck in the PyMC3 syntax - I hope someone can help me out. Thanks in advance!

Here’s a toy problem to demonstrate the issue:

I now want to build a model in PyMC3 that estimates b and p simulataneously. Here’s my attempt, but the chains are failing and I can’t figure out what’s wrong.

I’d appreciate help with the PyMC3 syntax, or pointers in the right direction. Thanks!

both give the same shape mismatch error.

I’ve just ran your code snippet and I was able to sample, here the traceplots (the model did not converge) 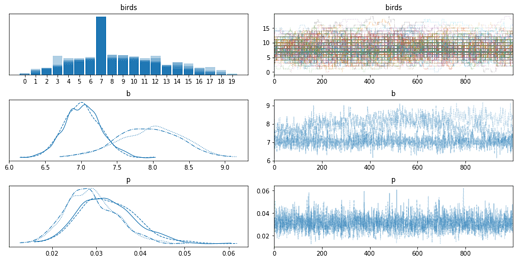 Could you specify which kind of error are you getting?

Thanks for trying this out! Interesting that it’s running for @vb690 .

On Windows 10 (yes for one time Windows OS is not the problem).

@lvluna Maybe you could try to update both Python and PyMC3 (@chartl only PyMC3), I do not know if it is related but in the release notes for PyMC3 3.11.1 they have Automatic imputations now also work with ndarray data, not just pd.Series or pd.DataFrame (see#4439).

Let me know if it changes something.

In looking at the traceplots that you get, I’ve realized that there is something wrong in the way that I’ve specified the model, not just in whether the sampler is running. I’m going to have to think about this, but will update when I figure it out. Thanks!